# 2  Staying with the idea of being in calmer water means we could eliminate  some of the motion sickness you may  have experienced,

Well with all the stuff going on it gave me time to let everyone know what is going on.  As you can see from the website I am now fishing in Traverse City.  This is a big change for me and the customers that I have had for many years.

Calm Waters   Last year I had  way to many cancellations because of weather.  West Grand Traverse Bay is protected on three sides from winds and waves.  Remember winds and reach(distance that makes waves) determine water condition.  Even with North winds there are still places to fish. 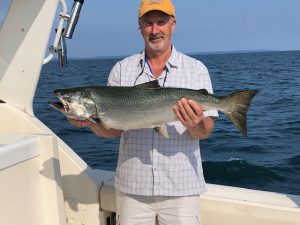 There are a few salmon around.  We happened to get lucky yesterday and land this 15 pound king.

This fish went to every “How to get away” school for salmon.  His first run almost spooled us, then because the fish came on copper, it was a long time getting close to the boat.  Several runs later we had our eyes on the fish and then he made the move, left, right, right-left, the run.  He had all of our downrigger wrapped around each other. 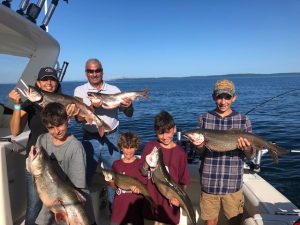 What a great time today with the Peterson Family.  Limit of trout and calm seas

Had an all day trip on Wednesday with a group of past clients.  We started out fishing salmon but the first landed fish was a Cisco.  One small king later the copper wire rig took off like a lightning bolt, fish on.

It was a battle while the fish screamed out more line.  Look out, downrigger line screaming with another king.  What seemed like forever and the fish continuing to cross over each other the fishermen kept dancing to try and keep the lines from crossing.  After fifteen minutes, we saw the fish that hit the downrigger, a nice three year old King.  Then it happened, one more run and it was gone.

Still had a King on the wire.  Papa battled that fish and was almost back to the leader and it spit the bait.  A lot of excitement and nothing to show.

Trolled north out of the harbor and boom, we boated a two year old salmon.  Now the sun was higher in the sky and the salmon bite pretty much ended.

As we got north, we switched baits and started trolling for Lake Trout.  over the next two hours we landed ten trout and had several other hits.

Tally at the end of the day, ten trout, two salmon and a cisco.  It was a great day.